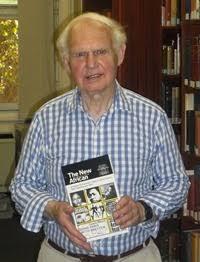 James Currey, co-founder of James Currey publishers (est 1984) has been called “The Godfather of African Literature”. His publishing house is responsible for producing vast numbers of academic books, journals, fiction and non-fiction books about Africa, especially in a period when it was considered not profitable to publish books about Africa. He together with Chinua Achebe under the auspices of Heinemann publishers, produced the famous African Writers Series (AWS) which have inspired many African(ist)s around the world.